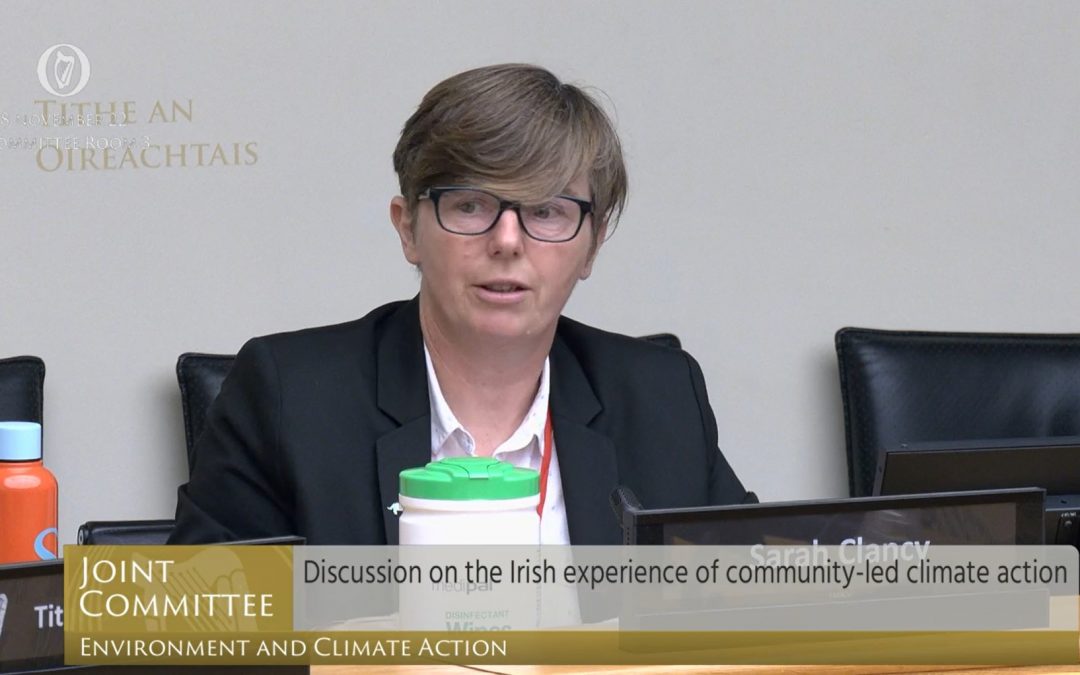 I would like to thank the chairperson and the members of this committee for inviting the PPNs to give input here today. I am the Coordinator of County Clare’s Public Participation Network but am here today to give input from the worker’s network of the PPNs. The worker’s network includes coordinators and resource and support workers from the PPNs in each local authority area in the Country. We come together on at least a quarterly basis to share knowledge, best practice and to support the work of the PPNs through collaboration.

As the members of this committee will be aware, the PPNs have an extensive membership of community and voluntary groups in Ireland- more than 18,000 groups. Our groups are categorised in three ‘colleges’ or ‘pillars’: Community and Voluntary, Environmental and Social Inclusion. The environmental college member groups of the PPNs which include many of the most significant and necessary environmental organisations in the country, exist in their own right separate to the PPN and direct their own actions and activities.  The role of the PPN in a nutshell is to help these groups come together, collaborate and influence policy in their Local Authority Area, although in many cases they also take action on national and EU policy issues too. The PPNs have further roles in information sharing, training, capacity building and in particular their structure has served to allow the environmental member groups to influence and connect with the other two colleges and in so doing to build community support for climate action in each county.

This means that while PPN environmental member groups are responsible for extensive programmes of climate action, biodiversity protection, marine preservation, community supported agriculture and community energy schemes, to name but a few, when they come together through the PPNs their purpose is usually to seek to bring their expertise to influence a policy or to direct resources towards (or away from) a particular action or project which impacts our climate, biodiversity and environment.  The key message that we can bring from our network’s extensive involvement with these groups is one of urgency. Climate change is real, it is already happening and that it is happening in our communities, neighbourhoods, countryside and towns. Our member groups are also keenly aware that the impacts of climate change are not being felt equally around the world or here, and that even as we struggle in Ireland to mitigate and adapt to the changes, others who value their lives just as much as we do are right now experiencing events such as famine, displacement, resource wars and man made ‘natural disasters’. Just last week the UN issued a stark statement that the goal of limiting global warming to 1.5 C is appearing less and less likely to be achieved. World is ‘nowhere near 1.5C warming target’ (irishexaminer.com)

It is on this basis that the PPN workers determined that rather than detailing the community led climate action already taking place in our communities in this forum or the all too real need for substantial financial and government support for Community Climate Action, that it would be more beneficial for us to use this opportunity to raise four pertinent issues all of which are serving to prevent or counteract the effects of positive community-led climate action and which need to be addressed at government and department level:

Despite the fact that in many areas we have very strong policies on climate action, our groups have raised in consultation after consultation the frustration they experience when government policies, planning decisions and even funds are used in ways that are contrary to our climate action plan and our international commitments. As PPN workers we are calling for a whole of government approach – our energy, transport, industrial, economic development, food production and farming, forestry, fishery and marine policies need to complement each other and contribute to the necessary reductions in carbon emissions – 50% over the next 8 years, and net zero by 2050. The new Climate Action Plan must apply to all departments and all state agencies and its provisions must be adhered to.

At the moment Ireland’s commitment to ensuring a Just Transition is not sufficiently well defined or robust enough for it to have any real meaning for communities. As noted by Dr Conor McCabe in work done for Clare PPN, just transition as currently included in the Climate Action Plan ‘is more akin to a compensation scheme, a buyout of affected businesses, than anything that can be recognised as a Just Transition. There is no dedicated strategy for the affected communities, villages, towns, and regions outside of a vague promise that the free market will provide jobs and houses and hospitals. There have been no attempts to establish the type of community-influenced dialogue and input that is critical to a Just Transition process’. (Clare_Anti_Poverty_Report_Sept2022_web.pdf (clareppn.ie)

This is not an academic concern nor is it a concern about language- the changes indicated in Ireland’s National Planning Framework and all of its subsidiary plans are not happening on a blank canvas. The changes are happening to communities with people living in them and their lives will be impacted. If the negative impacts of climate action are not recognised, planned for and ameliorated where possible it is unreasonable to expect communities to get behind them and not unreasonable to expect communities to oppose them- a process which will delay necessary action. Within the PPNs our social inclusion colleges are all too aware of people living in isolation or poverty or who are disabled who will find it hard to benefit from climate action when it involves carbon taxes and a move towards regionalisation of services and supports- many such categories of people will find themselves worse off in the short term as a result of climate action. A just transition strategy would ensure that no person is left behind. We urgently need such a strategy. Immediate action is necessary to ensure that communities themselves are engaged in creating just transition plans and that this process and the actions which result from it are fully resourced by national government.

Community-led climate action can’t compensate for a lack of necessary state investment in infrastructure although many of our member groups will do their very best to do so. Our PPNs particularly the rural ones know all too well that in many cases even people who wish to live more climate friendly lives cannot through lack of infrastructure. Ireland is a small accessible country and should have an extensive dependable public transport system. Our retrofitting programme for example needs to be redesigned as it is clear that it will not ensure the level of carbon reductions necessary as currently constituted- and the ancillary benefits to people’s health and income will also not be achieved at scale. While the capacity, expertise and knowledge of community groups should not be underestimated it is our current belief that the Government is underestimating the necessity and extent of direct state investment in and ownership of, public transport, renewable energy, energy efficient housing and just transition measures. Properly managed these will be investments in Ireland’s future and the wellbeing of all our people and the beautiful country we are lucky enough to inhabit.

Many of the PPN’s environment college member groups and national networks expend a huge proportion of their available resources on preventing damaging actions by the state, state agencies and industry operating under state permissions. These actions include campaigns, lobbying, and legal challenges. Over the course of the last two governments we have seen attempts to prevent or minimise the opportunities for such groups to impact the planning processes, as the PPN workers network we would like to see a fresh approach where dialogue is facilitated and the input and expertise of environmental groups is respected. This will help to ensure that costly and divisive legal processes become a last resort and that better decisions and plans are made. It is our experience as PPN workers that our member groups, as specialists are frequently ahead of policy makers in their understanding and view of what constitutes effective climate action. In order for policy makers to avoid costly policy mistakes it is necessary for them to be open and receptive to input from environmental and social justice groups. This is not seeking exclusive or preferential access, it is clear that governments are lobbied from a wide range of angles – from industry, farming, tech, construction, and energy sectors for example, however it would serve us well to understand and differentiate between those who are advocating for profit and those who seek the common good often at personal cost rather than gain.

I thank you for the opportunity to make this input to the committee and welcome questions on anything raised above or any other aspect of the PPNs role in climate action.