The Irish Human Rights and Equality Commission yesterday released the reports on Equality Reviews which they required each Local Authority to carry out in respect of their provision of Traveller Specific Accomodation.

You can read the review of County Clare Here:  Clare-CC-Equality-Review-IHREC_Final

For more details on this IHREC initiative go to this link: https://www.ihrec.ie/our-work/equality-review

Clare PPN Submission to the consultation on the National Action Plan Against Racism:

Click on the link below to read our submission:

Clare Public Participation Network frequently makes submissions on National and Local Government Consultations. We do this by alerting our member groups to the consultation, offering to hold a consultation meeting and if there is interest from our groups, colleges or expert groups we work together to collaboratively create a submission. When compiling such submissions we also refer to priorities identified or motions passed by our member groups at Plenary meetings, previous Clare PPN submissions on relevant topics and most recently we also refer to the Wellbeing Vision Statements for Clare Created by our members in 2020.

Response from Minister Simon Coveney to Clare PPN’s request that Ireland propose a global ban on fracking at the UN.

At Clare PPN’s last Plenary Meeting on May 11th a motion was passed that we should ask the Government to propose a Global Ban on the practice of fracking to the UN. Our Councillors in Clare passed a similar motion on our and other environmental groups requests. Clare PPN wrote to the Taoiseach, Micheal Martin,  and to the Minister for Foreign Affairs and Minister for Defence Simon Coveney TD. We received a receipt of reply from the office of An Taoiseach and on Monday 12th July this response from the office of Minister Coveney.

On behalf of the Minister for Foreign Affairs and Minister for Defence, Mr. Simon Coveney T.D., I wish to thank you for your correspondence on behalf of Clare Public Participation Network and for raising this important proposal.

The work of civil society and community and voluntary groups in bringing the concept of a resolution for a global ban on fracking to its current point is to be congratulated.

As you will be aware from the Programme for Government, the Government does not support the importation of fracked gas and committed to developing a Policy Statement to establish that approach. This Statement was published on 18 May 2021 and outlines both constraints and opportunities for Government action in this area, notably given European Union obligations.

Minister Coveney has consulted widely with partners, including through Irelandâ€™s Permanent Mission to the United Nations, on the question of whether this is the appropriate time to bring forward a resolution along the lines the civil society and academic organisations have developed.  The Minister regrets to say that it does not seem to be an opportune time to push for a resolution, with more advocacy needed by civil society and others before the necessary alliances required to get a resolution over the line would emerge â€“ unfortunately, some time away.  Minister Coveney’s priority for this year is take maximum opportunity from Irelandâ€™s Security Council term, including the Security Councilâ€™s engagement on the Climate and Security agenda.

Nevertheless, Minister Coveney, with his Government colleagues, is committed to taking action in ways which are consistent with your proposal. In the short term, the revision of the European Unionâ€™s Gas Directive and Gas Regulation provides an opportunity to try to build consensus within the EU, itself an important constituency for any work at the UN.

Minister Coveney wishes you the best in your continuing work on this important agenda.

Nora Delaney
Private Secretary to the Minister for Foreign Affairs

Work Report for April to June 2021 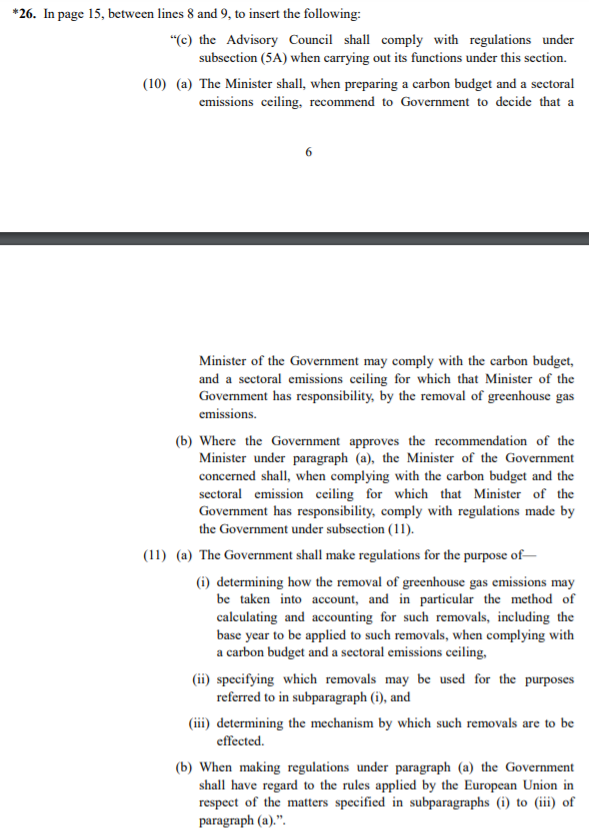